No matter how many times you wash your dishes, they just get dirty again.   That is way it generally works.  This is not rocket science.  It is merely the routine of the biological need of our bodies to eat and replenish energy.  Though necessary, those dishes just keep piling up.  Do you ever just get tired of washing the same dishes again and again?  One solution could be to get new dishes, but then we’d just get tired of washing those dishes too.  So the problem isn’t the dishes is it?  The issue lies more within our attitudes toward the routine and mundane tasks of life.

There is a problem with my dishwasher. 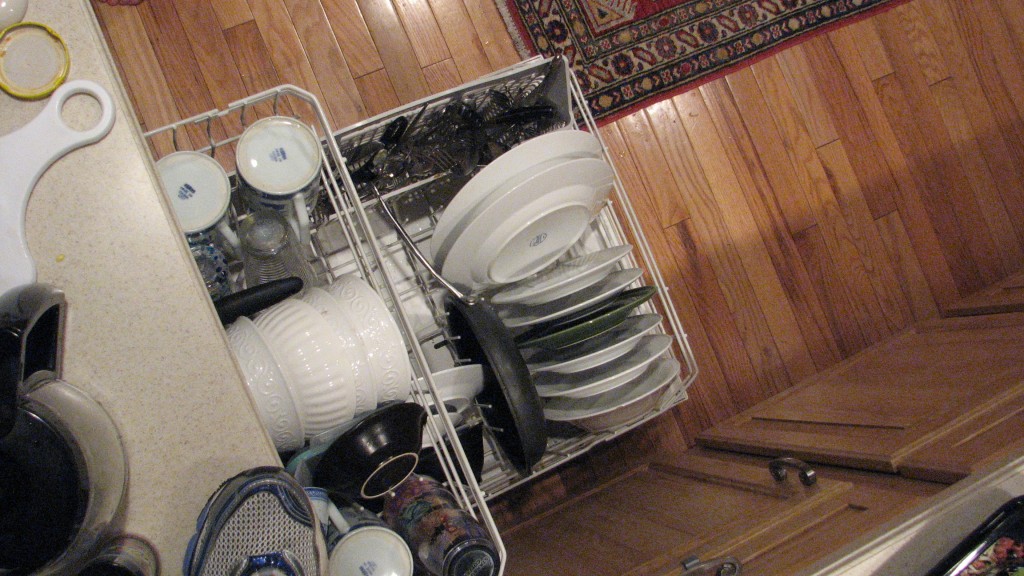 Many days my dishwasher is rather ornery and tends to procrastinate.

Now I am not talking about my Kenmore here…

I am talking about the human dishwasher.

Unlike my Kenmore, I can’t go to Sears and buy a new one when this one acts up. 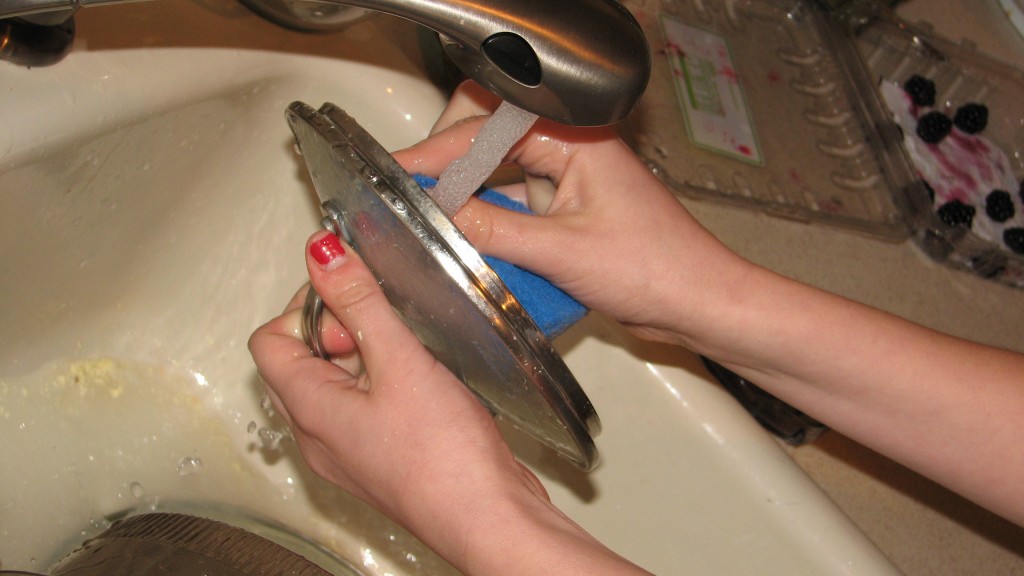 Dishwashing is hard on a manicure.

I can’t call the Maytag repairman to come fix the heart that resists the imposition of this task.  Changing my dish soap will make no difference…Joy, Palmolive, or whatever will not solve this issue.

I learned a long time ago that not washing the dishes doesn’t work out well for long.  You eventually run out of clean dishes or out of space to put the dirty ones.

The bathtub really isn’t the best place for the overflow.

Though I might have a little grumble in my innards from time to time, I am not really the source of this kitchen battle.  In reality, it is my Under-Twenty crowd that gives rise to this kitchen skirmish.  It is the teenage dishwasher that needs a little adjusting in my household.

Believe it or not, I did teach and train my kids to put their dishes in the dishwasher when they were younger.

Dish washing training began at a young age around here…while it was still a fun thing to do. 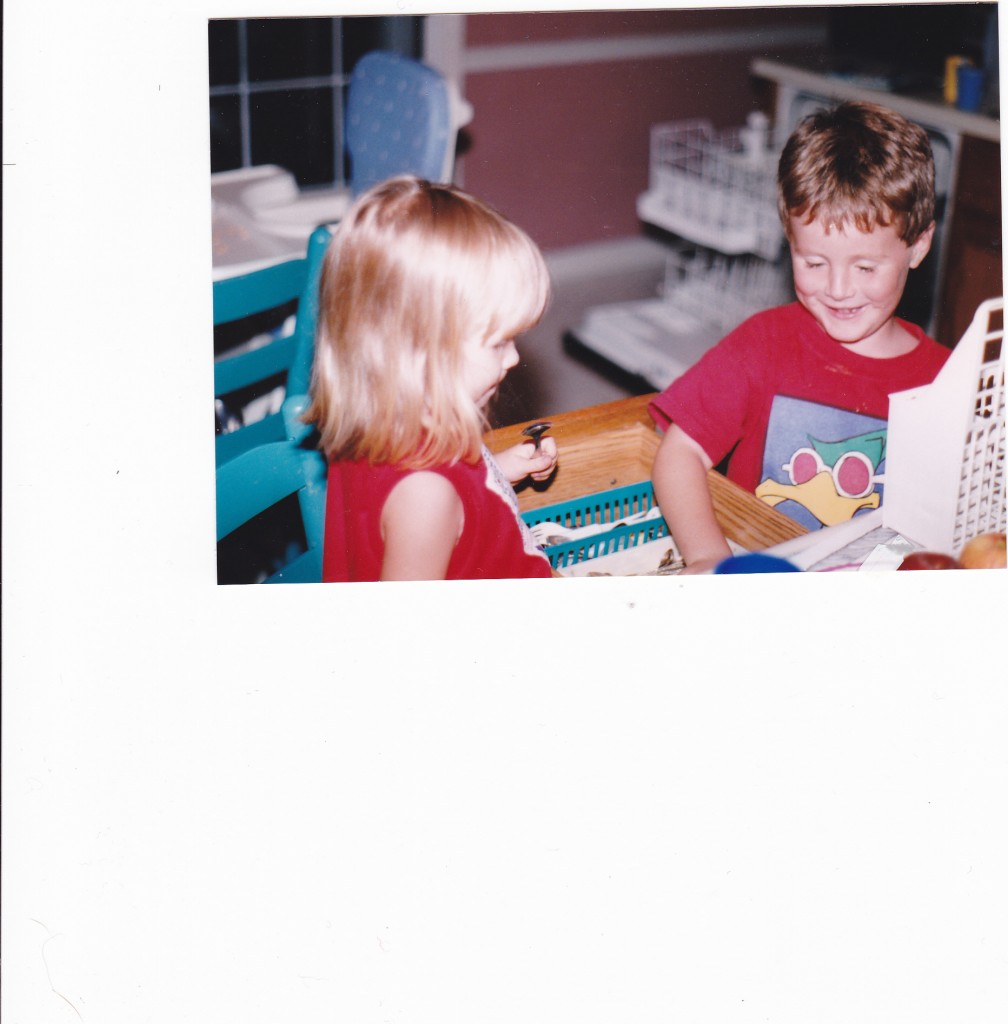 There were days we played dish washing with lots of suds and plastic items in the sink.  It was FUN.

They asked to do it.  (I knew I should have video taped some of those moments.)

From the time they were four years old, they had “jobs” to help Mommy with the dishes–washing and putting away.  In elementary school, our kitchen ran like clock-work and the chore chart was the source of positive reinforcement with the fun of cool stickers.  Well, stickers, no matter how bright and shiny, are no longer a good source of motivation.

When they became teenagers, the task somehow became something to be avoided.

Just when they are old enough to actually do a good job with this task and truly be helpful, the battle begins.   At my house we trade kitchen tasks by the week because remembering who did the dishes yesterday seems to be way too taxing for all of us.  I have an excuse…I am over forty.  But the young one’s are still firing all of the synapses in the brain and should be able to remember who did it yesterday.

Much about character and priority is revealed in one’s attitude and follow-through (ie obedience) in the world of dish washing.  This task seems to swipe off all of the appearances of the helpful child, revealing the true heart that would rather be…texting.

How  texting possibly compete with the joys of a clean and tidy kitchen I cannot understand…but it is true.

If you don’t believe me, just ask your teen which they would rather do, text or wash. 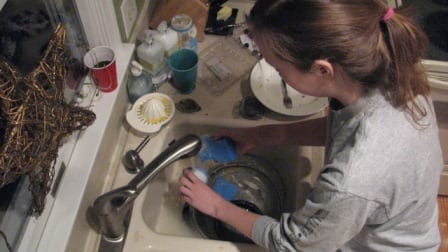 Blame it on the Media.

I think the problem lies with the media.  Dish washing is not glamorized on TV these days.  Yes they have kitchen shows, but they are popular with few teens and you rarely see Rachel Ray washing her dishes.  The glory is in the food prep and presentation.

One solution is to glamorize dish washing in the media. How about some MTV videos featuring the exciting art of dish washing rather than break dancing?

And have you noticed that there are no X-games for dishwashers?  No competitions of Olympic proportions with cool uniforms. What incentive is there to train and build skills if there is no glory of competition…no opportunity to win trophies or accolades for dish washing.

What are we thinking?

There are few cool gadgets for dish washing…no crazy-fun soap dispensers, no cool noises, and no neon colors (unless you’re into that color for your dishes). Seriously–a sponge, a rag, or a spray nozzle is as good as it gets.  A rag?

No wonder no one gets excited about washing dishes.

And the answer is…

If these suggestions are not to your liking, you can always try the age-old parenting technique of reward or punishment…but like I said before,stickers no longer work, and there are only so many times you can take away the phone, the ipod, or time with friends.  If you  bring out the big guns for dish washing, what is left in your arsenal for the battles that are far more serious issues?

Though this is true, there are ways for the savy parent to motivate the teenage dishwasher.  Reality discipline is quite effective.  You don’t help, you don’t eat.  That is pretty much going to be the way it is once they are out on their own, so they may as well learn this life lesson while they are still under your roof…

However you choose to wage your battle with the dirty dish, I hope you are successful so you have time and energy to enjoy the finer things in life…

because dish washing ain’t one of them!

How to Do Battle Together by Encouraging One Another

Is Organization the Priority?